Why an All Boys' Community?

Be known. Be challenged. Be loved.

Part of what makes Woodberry great is a commitment and dedication to every boy. Schools for boys focus every day on the unique joys of teaching young men. We've spent more than 130 years working with boys to prepare them for lives as leaders, learners, and citizens. We have made an intentional choice to focus on the intellectual, physical, social, and emotional lives of boys. It's science: Boys learn differently! 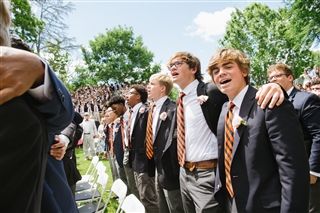 At Woodberry, we know boys learn and develop in different ways. It’s a simple fact that boys and girls grow at a different pace. Boys’ strengths are different from those of girls, especially before male and female brains are fully developed. Woodberry's curriculum and classroom experience is designed with boys in mind. Lessons are designed to be hands-on whenever possible. Our students often work collaboratively, as years of research have shown most boys relish the chance to work in a group on complex tasks. The all-boys, all-boarding nature of Woodberry allows our faculty to develop very strong relationships with their students. Because our faculty have a chance coach boys on the playing field, eat meals with them in the dining hall, and invite the boys into their homes to become part of the family, they develop stronger relationships than are possible at most day schools or co-ed schools.

"The learning relationship is best understood as an example of a working alliance, in which teachers serve as agents of change and students as those seeking to grow, with mastery of the subject or skills the objective of both. A distinct set of responsibilities falls to each role in the alliance. While students absorb themselves inefforts to assimilate new information, skills, and perspectives while confronting their limitations, teachers — the guiding professionals — must serve as relationship managers," Reichert wrote in a 2016 paper.

Boys respond best to teachers who demonstrate a mastery of their subject.

"As a mother of two boys with vastly different personalities, interests, and challenges, a common thread of their time at Woodberry was that they were known, challenged and loved throughout their journeys. At Woodberry my boys became part of a brotherhood and culture that held them accountable for their words and actions. They also discovered a safe space to try, and sometimes fail, at new endeavors they wouldn’t have had the opportunity to pursue at other institutions, such as mountain biking, rock climbing, learning to play the bagpipes, and discovering a passion for journalism and sports broadcasting through WFSPN. They participated in once-in-a-lifetime study abroad programs that found them exploring ancient ruins on the Silk Road trip or living with a family in Spain.


There were proud moments of achievement, and there were inevitable hardships and frustrations throughout the Woodberry experience. In their most difficult times, my sons found they were never alone. Whether it was a roommate, prefect, friend, advisor, or coach, they were surrounded by others whose shared experiences bred compassion and encouraged perseverance. There was an understanding that the pursuit of excellence and stepping up to new challenges forged their character. In the times when they fell short, their efforts and willingness were recognized, and they were reminded that they were enough."


Carla Warlow, Orlando, Florida
Mother of Quinn ’21 and Griffin ’23
Michael C. Reichert, director of the Center for the Study of Boys’ and Girls’ Lives at the University of Pennsylvania, has conducted extensive research on the type of relational teaching common at Woodberry. He has found that boys respond best to teachers who demonstrate a mastery of their subject, set high standards for themselves and their students, and share common interests with the boys they teach.

As Michael Gurian and Kathy Stevens noted in the journal Educational Leadership, years of MRI and PET scans done on the brains of boys and girls have shown how those organs function differently for each gender during adolescence. According to Gurian and Stevens, "Girls have, in general, stronger neural connectors in their temporal lobes than boys have. These connectors lead to more sensually detailed memory storage, better listening skills, and better discrimination among the various tones of voice. This leads, among other things, to greater use of detail in writing assignments." Boys, meanwhile, "have more cortical areas dedicated to spatial-mechanical functioning, males use, on average, half the brain space that females use for verbal-emotive functioning. The cortical trend toward spatial-mechanical functioning makes many boys want to move objects through space, like balls, model airplanes, or just their arms and legs. Most boys, although not all of them, will experience words and feelings differently than girls do."


A great resource for boys education is the International Boys School Coalition, a global group of all boys schools. Woodberry was a founding member of the group, and our faculty remain active participants in the coalition's conferences, seminars, and research opportunities. Dr. Byron C. Hulsey, our headmaster, is a member of the IBSC's board.

Woodberry Forest, VA 22989
Phone: 540-672-3900
Woodberry Forest admits students of any race, color, sexual orientation, disability, religious belief, and national or ethnic origin to all of the rights, privileges, programs, and activities generally accorded or made available to students at the school. It does not discriminate on the basis of race, color, sexual orientation, disability, religious belief, or national or ethnic origin in the administration of its educational policies, admissions policies, scholarship and loan programs, and athletic or other school-administered programs. The school is authorized under federal law to enroll nonimmigrant students.